Detroit rapper Big Sean signed to Kanye West’s G.O.O.D. Music imprint in 2007 after impressing his future label with an impromptu freestyle in a chance meeting at a local radio station two years earlier.

Now Big Sean is headed back to Detroit 2 on Friday (Sept. 4) and he’s bringing along a lot of friends, including Post Malone on “Wolves,” Dave Chappelle, Jhene Aiko, Erykah Badu, Lil Wayne, Travis Scott on “Lithuania,” Dwele on “Everything That’s Missing,” and many more. In addition to the previously released track “Deep Reverence” with the late Nipsey Hussle. The rapper released his dope packed track list for his anticipated new album on Wednesday and the 21-track effort is coming out with A-list support.

The rapper released a teaser for the “Body Language” video on Thursday (Sept. 3) in which he and Aiko meditate at the beach and wear matching tie dye shirts as they take a sexy ride through a psychedelic car wash. 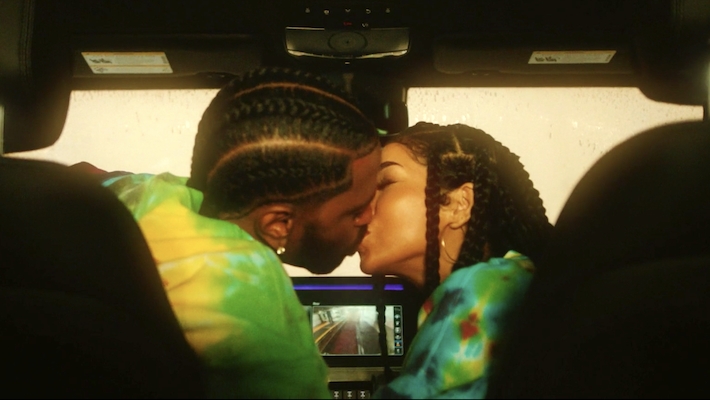 While Ty is featured on the song. The video is entirely focused on Sean and Jhene as they cruise the coast in their freshly washed whip. With the video angel being shot from the backseat the camera plays fly on the wall as the couple visits the coast to visit a beach house for some meditation, cuddling, and song writing.

In a recent interview with Vulture he was asked:

Do you sometimes avoid social media to cut down on stress?
Sean stated,”I don’t go on social media that much. I go on there periodically, but I am a person who would easily get addicted to social media. I get on there and go from one thing to the next. It’s a rabbit hole. I just be looking up facts, random things. It wasn’t productive for me. For some people, that’s their means of income now, so it’s nothing to frown upon or to judge anybody over. But for me, personally, I get distracted.”

Check out the full track list and “Body Language” teaser video below.